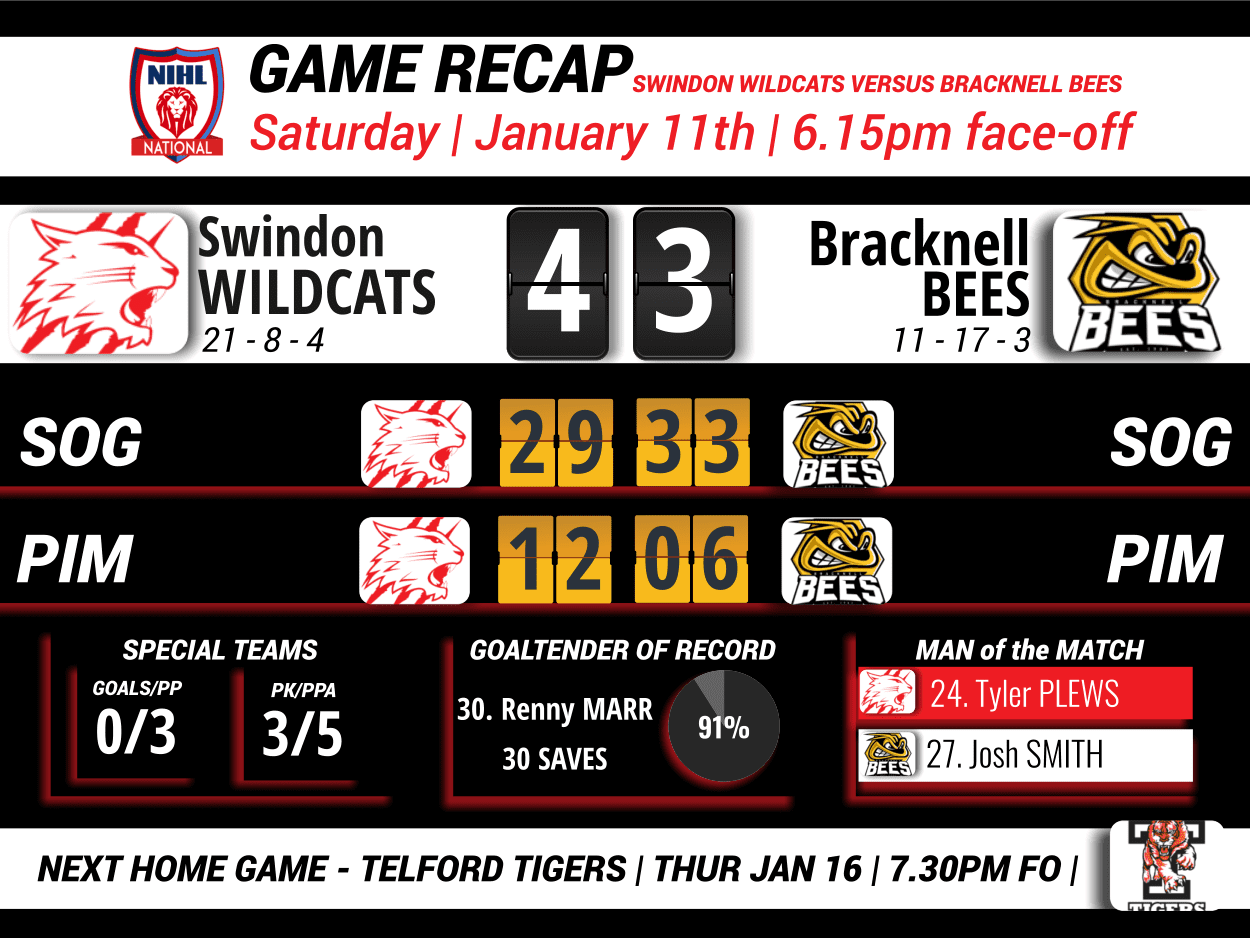 Swindon Wildcats completed a narrow 4-3 victory on Saturday evening against the Bracknell Bees. Goals from Tyler Plews, Tyler VanKleef, Tomasz Malasinski & Stevie Whitfield were enough to secure the 2 points in front of a bumper crowd at the Better Link Centre.

The opening period was a scrappy affair for both sides with the teams canceling each other out across the ice. They went into the first period break with the game remaining at 0-0 and the fans not having too much to cheer for on both sides.

Into the second period and the Bees were able to break the deadlock for their first goal, but this would not be until 35:21, when Aidan Doughty was able to tap in a loose puck on the PP with the assists going to Dominik Gabaj and Brendan Baird. As the second period came to a close the Wildcats knew they’d need a big third period effort to get ahead in the game.

It would not take long before the Cats were able to tie the game, a shift with continued pressure developed chances for Aaron Nell and Tomasz Malasinski. However, after Stevie Whitfield switched the play across the ice to Tyler Plews the Scottish D man was on hand to wind up a big slapshot into the back of the net, which would be followed by an equally as big celebration.

At 50:32 the home side took the lead when a superb piece of individual skill from Tyler Vankleef was enough to see the puck hit the back of the net and make it a 2-1 hockey game. At 52:47 the Cats took a penalty with Floyd Taylor heading to the penalty box for a high-sticks call and it gave the visitors an advantage to tie the game up. However, off the opening puck drop, Tomasz Malasinski broke the play up on the blue-line and raced forward on a breakaway. The Pole deked to the right and slid the puck right between the legs of Adam Goss to make it 3-1 right at the start of their PP.

At 57:43 the drama continued when Roman Malinik was able to jam the puck home past Renny Marr to bring the Bees back within one goal with just over 2 minutes left in the game. The Cats then took another penalty when Sam Bullas went to the bin for elbowing. The Bees pulled Goss and despite a valiant start to the powerplay, Stevie Whitfield picked the puck up and launched it down ice and into the empty net.

Just when the Cats thought the game was dead and buried, Roman Malinik was on hand to score once more for the Bees at 58:54, but the Cats were able to kill off the remaining 1:06 and seal a nervy 4-3 victory in front of the home fans.

TYLER VanKleef devastated Raiders on Sunday night by netting an exceptional hat-trick in only 17 minutes as Swindon Wildcats confirmed a timely four-point weekend by beating the capital outfit 3-8.

An eventful first period saw Aaron Nell, Edgars Bebris and Chris Jones light the lamp for the visitors, though bottom half Raiders dug in and trailed by only a goal at the end of the first 20.

Edgar Bebris netted a second to stretch Cats’ lead to two, and then came VanKleef’s brilliant hat-trick to take the game away from the trying hosts.

There is no hiding the fact that Wildcats will need title hopefuls Telford Tigers to slip up several times between now and the end of the season in order to have a sniff of lifting the season’s ultimate piece of silverware.

But discussing the weekend just finished – which included a confidence boosting 4-3 win over Bracknell at the Link on Saturday – Nell voiced his delight regarding how his players performed.

He said: “I’m very happy with the team, I thought we were excellent on Sunday (against Raiders) from start to finish.

“We really deserved what we got, it was exactly how we want to play. At 3-2, Renny (Marr) made a great save on the penalty kill and we scored two or three shifts after that.

“It was nice for Tyler (VanKleef) to get his hat-trick. When you’re ahead, it can be tough to play but I am happy with the way we did.

“When we play responsibly and well defensively, we are an excellent team.”

Wildcats now have a rare Thursday night home game to look forward to as Telford Tigers visit Wiltshire to contest the first leg of the NIHL National Cup semi-final.

The mouth-watering tie will be followed by the second leg in Shropshire on Wednesday, January 29.

And putting eight goals past Raiders this evening has no doubted granted Nell’s roster a confidence boost ahead of their important semi-final test.

He added: “It’s a huge win because we are trying to stay in touch with Telford as best we can, though I know they are way ahead.

“It will be an excellent game on Thursday, all games against Telford have been. It’s easy to see why they are top of the league. We’ll need to match their intensity.” 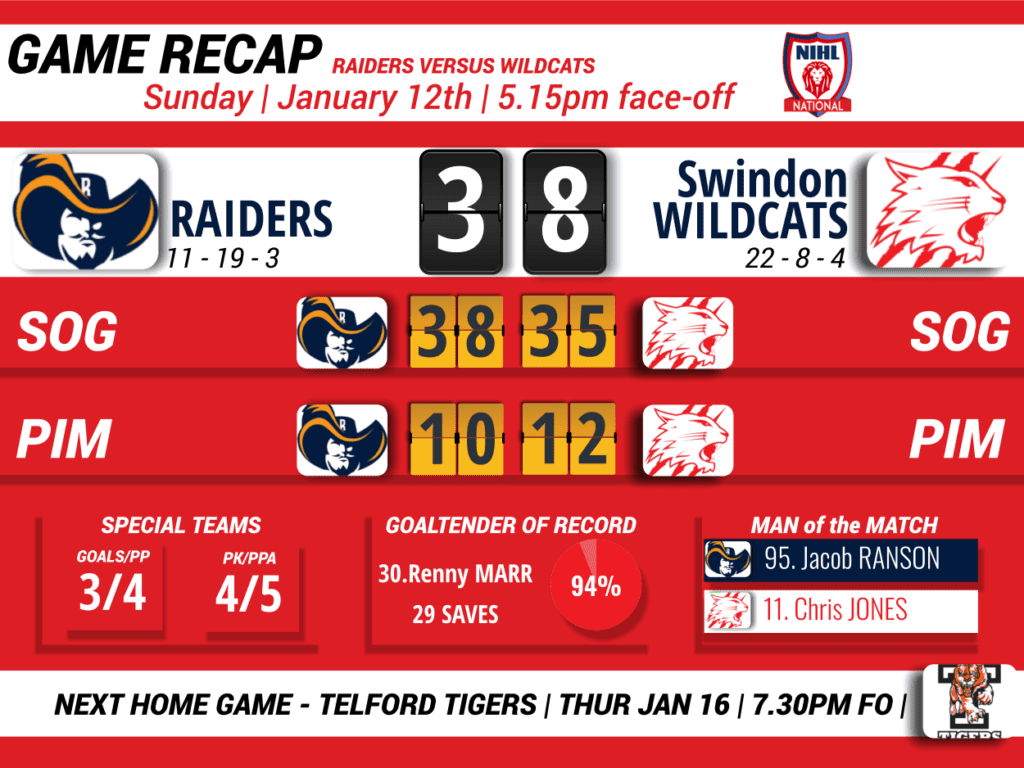