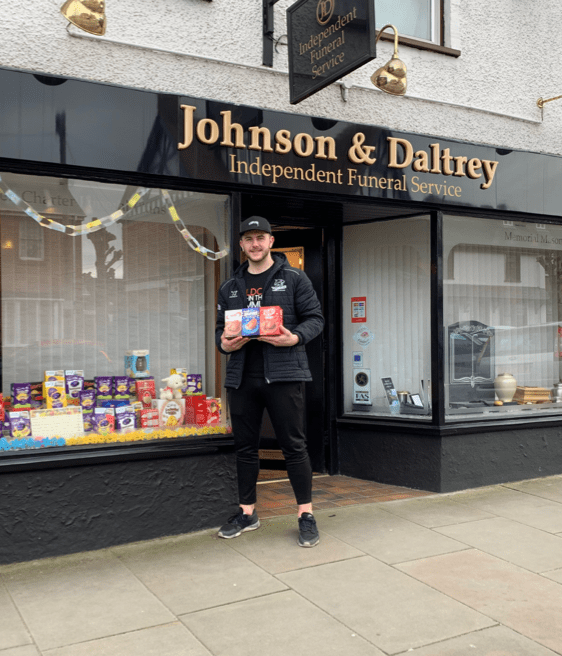 Easter eggs are being collected by Johnson and Daltrey Funeral Directors in Royal Wootton Bassett for the Easter Egg Trail event in Town Gardens organised by the Wiltshire Treehouse, a local child bereavement charity that helps young people deal with loss.

Last week Swindon Wildcats Player Tyler Plews and Community Development Officer Dave Ridley attended the branch and donated a collection of Easter Eggs as well as some raffle prizes signed by the Wildcats #24. With Swindon Wildcats in the Community is an organisation which works with hundreds of local children a week the community team wanted to do all that they could to support the event, Dave Ridley said that “The planned event is a great way to increase awareness of child bereavement, when we were contacted by the staff at Johnson and Daltrey we wanted to do all that we could to support the Wiltshire Treehouse event. When we spoke to other staff and some of the players, everyone wanted to be involved so we arranged for signed gifts in the raffle and a family ticket to a game next season.

We hope that the event is a great success when it is rescheduled, we encourage anyone who would like to donate gifts, Easter Eggs or Raffle prizes to contact Johnson and Daltrey directly who are accepting donations and building a display in their branch window”

The easter egg event trail has sadly been postponed due to government guidance however everyone involved is continuing to collect donations and will arrange for all donations to be made when the event is rescheduled.