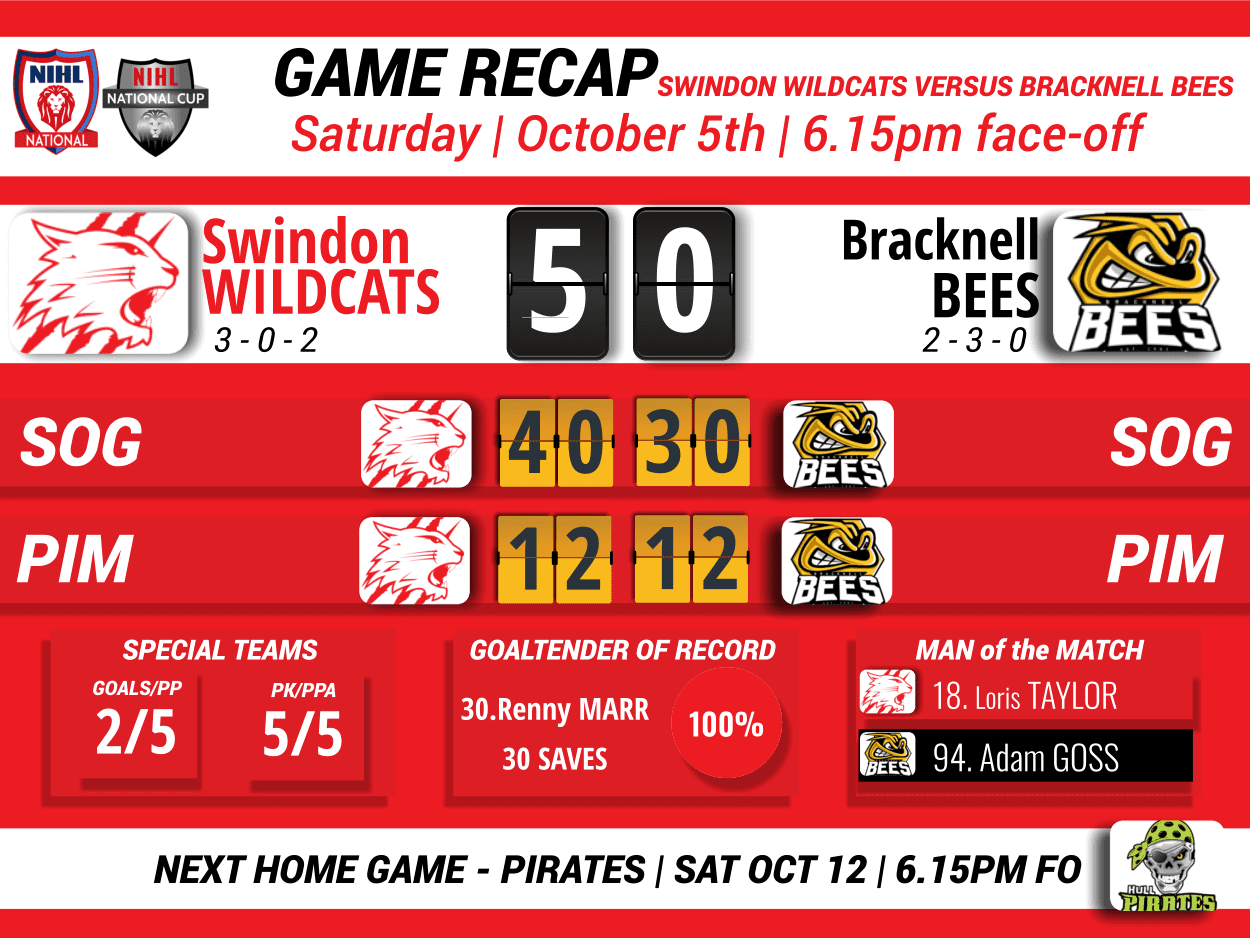 SWINDON Wildcats made it three home wins out of three in the National League at the start of the
season following a five-star success over Bracknell Bees on Saturday night.
Following previous triumphs over London side Raiders and Peterborough Phantoms at the Link
Centre, Aaron Nell’s side followed it up with another over their rivals from east along the M4.
There was little to choose between the two sides for much of the match and only one goal arrived in
each of the opening two periods before the Cats finally took control of the contest for good in the
final session.
Swindon player-coach Nell said: “I am very happy with the team.
“It was very similar to last Saturday against Peterborough in terms of our intensity and our
commitment. I thought we were always in control of the game.
“To finish the way we did was great and to get a shut-out in this league is no mean feat but that’s
two in a row and we are very proud of the team.
“The defence was a massive part of the win. That’s three games in a row where we haven’t let a goal
in five-on-five.
“I am proud of the defensive unit, they are working extremely hard. To lose Sam Jones over the
summer was tough but they are all chipping in to replace him and they have been fantastic.
“They are a very committed group and they have a lot of pride. I was happy with the whole team&#39;s
performance but especially the defence and Renny (Marr, netminder).”
Edgars Bebris broke the deadlock for Swindon in the first session before player-coach Nell doubled
his side’s advantage in the second.
The home side were able to pull further clear in the third period as Polish import Tomasz Malasinski
hit the back of the net.
At the other end, the Swindon defence remained water-tight and even managed to hold firm despite
twice playing with just three skaters on the ice after a flurry of penalties in quick succession.
After surviving that siege, the Cats then killed off Bracknell for good in the closing stages with further
goals from Chris Jones and youngster Jason Warren to wrap up a convincing victory.
Nell added:  “I think it was closer than 5-0 suggests.
&quot;It was tough out there, especially in the first period. To get the goal in the second period put us in
control.”
Swindon go back on the road on Sunday and travel to Romford-based Raiders.

Sunday evening saw the Wildcat travel to Romford to take on the Raiders. A flurry of second period
goals were enough to give the hosts a narrow 5-4 victory over the Wildcats, backstopped by a MOM
performance from home net minder Michael Gray.
Goals in the first period from Aaron Connolly and Blahoslav Novak were enough to give Raiders a 2-1
lead, despite a power play effort from the Wildcats Chris Jones. Going into the first break looking to
regroup it was the Raiders who jumped out of the blocks in the second by making it 3-1 inside the
first minute of the period thanks to a Jake Sylvester goal.
A masterful few shifts of hockey followed where a lethal Tomasz Malasinski shot somehow found
room in the top corner of Gray’s net before on the next shift, Aaron Nell used his size well to get
behind the D men and fire a backhand shot past Gray to make it 3-3.
Yet again the Raiders wouldn’t lie down and were soon able to restore their two goal cushion with
another goal from Blahoslav Novak and one from import Lukas Sladkovsky. As the middle period was
coming to a close the Wildcats were able to reduce the deficit when Eddie Bebris broke through one
on one and fired into the low left hand side of the net.

The final period was one of frantic chances at both ends of the ice but neither side were able to add
to their goal tallies meaning the Wildcats had been defeated 5-4 and the search for their first four-
point weekend of the season moves on to next week where they take on the Pirates at home before
travelling down to take on the Bracknell Bees on the Sunday. 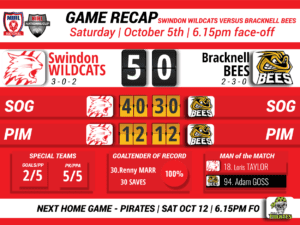 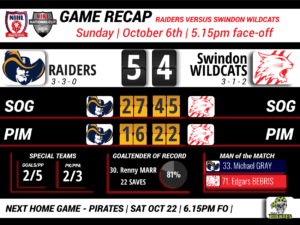