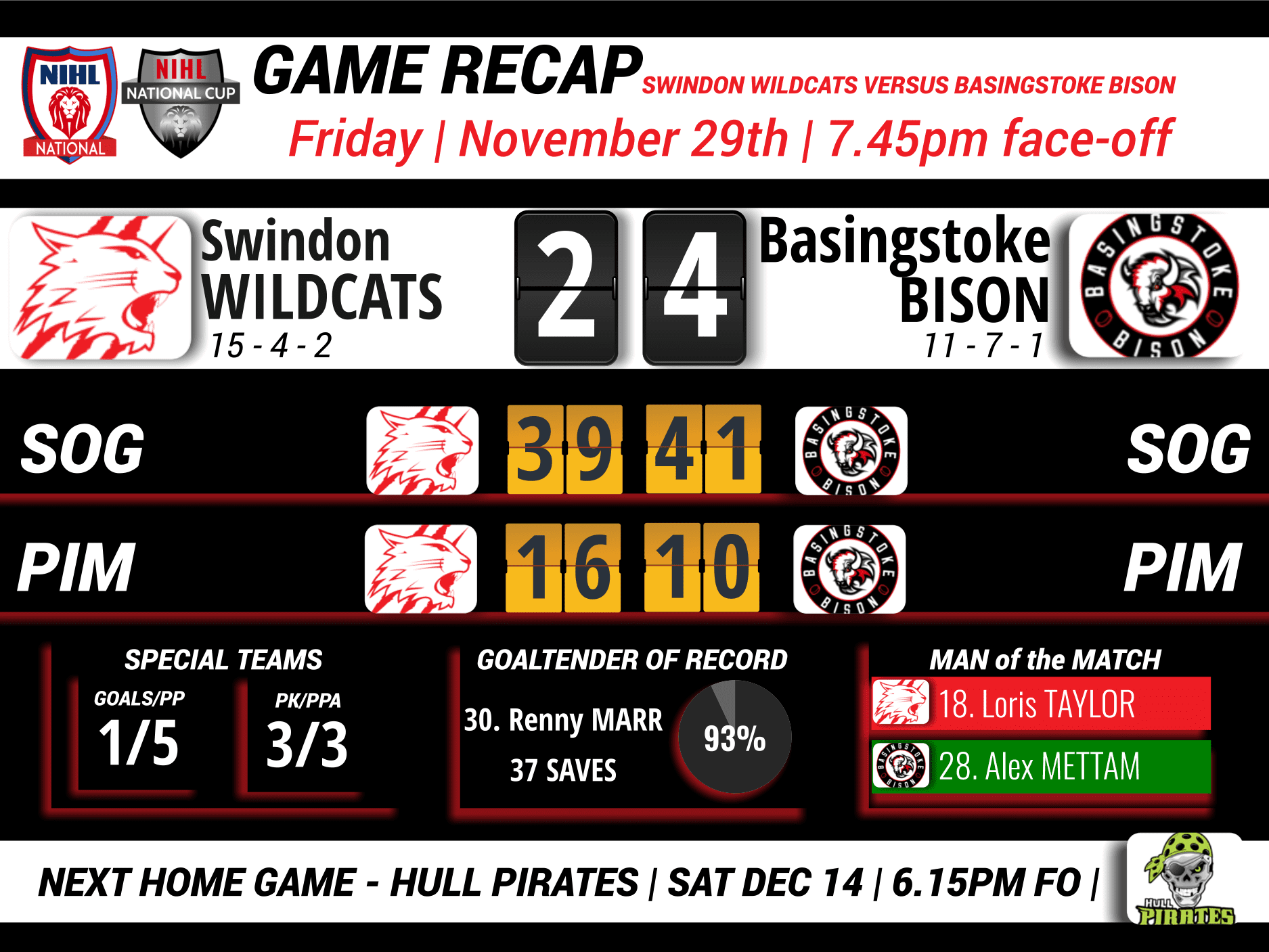 SWINDON Wildcats suffered a third defeat in five National League games as they went down 4-2 at home to Basingstoke Bison on Friday.

The loss was a second in three on home ice for Aaron Nell’s side after they were beaten by Telford Tigers at the Link Centre a fortnight ago.

With just one game scheduled this weekend, the result means Swindon will surrender top spot in the table should Telford win either of their fixtures on Saturday or Sunday.

Cats player-coach Nell had no complaints about the loss and said:

“It was certainly a fair result…

“We have to give Basingstoke a lot of credit. They were a desperate team and a team that always plays well in our building.

“They 100 percent deserved the win. They out-worked us and they wanted it more than us.

“It was a disappointing 15 minutes in the second period which cost us the game.

“We all wanted this new competitive league, but that result shows that if you are not at your best, you are not going to win.

“We weren’t at our best but it’s about how you bounce back. A couple of weeks ago, we lost twice but bounced back to get two more wins after that.

“The most important thing to me is how we bounce back.”

Basingstoke broke the deadlock eight minutes into the first period after catching the Cats on the counter when short-handed as Michal Klejna sent a crisp strike under the body of home keeper Renny Marr.

Swindon did not take long to respond and Lloris Taylor leveled the scores on the powerplay, poking home from close range after Bison keeper Alexander Mettam had spilled Chris Jones’ initial effort.

There was no addition to the score before the end of the first period, and again it was the visitors who struck first in the second session as Bayley Harewood breezed through the Swindon back-line before lashing into the net.

Basingstoke began to take control of the contest midway through the period and Marek Malinsky grabbed a third goal shortly afterwards – and that two-goal cushion remained as the buzzer sounded.

More than 40 minutes had passed since Swindon’s first goal of the night before they finally found the net again as Tyler Vankleef lifted a superb strike over Mettam to give his side a lifeline in the third period.

Still trailing with 90 seconds left on the clock, the hosts opted to pull netminder Marr as they attempted to push for an equaliser, but the gamble backfired almost instantly.

Ashley Tait sent in a shot from distance that dribbled over the goal line despite a despairing chase from Cats coach Nell, which meant his side were left to reflect on a night of disappointment.